Experiencing a Christmas Market is one of the highlights of the holiday season!

Experiencing a Christmas Market is one of the highlights of the holiday season in Germany, Austria and Switzerland, and in other European countries.

These open-air festivals date back some seven centuries and the European Christmas Market (ECM) will revive this cultural tradition and bring its sights, sounds, and aromas to downtown St. Paul, Minnesota.

Since the Middle Ages, towns in the German-speaking part of Europe have held Christmas Markets in their market squares.

Dresden‘s Strietzelmarkt was first held in 1434. The Christmas markets of Bautzen (first held in 1384), Frankfurt (first mentioned in 1393) and Munich (1310) were even older.

The German name for a Christmas market often is “Christkindlmarkt” or “Weihnachtsmarkt”. The last name simply means “Christmas market” whereas the first name originates from the tale of the Christkind or Christchild. In many locales on opening nights, onlookers welcome the “Christkind“, or boy Jesus, that is acted out by a local child.

In other towns, the Christkind is normally depicted in a white and gold robe with a crown atop her blond hair and angelic wings.

Depending on the region and family tradition, the Weihnachtsmann (Father Christmas or Santa Claus) or the “Christkind” is the bearer of gifts for children on Christmas Eve; the Christkind even brings the Christmas tree.

Children never see the Christkind in person, they even are told that Christkind will not come and bring presents if they are too curious and try to spot it.

The Christmas tree allegedly brought by the Christkind, is put up in the living room in secret by the parents, and the family enters for the opening of presents when the parents say that they think that the Christkind has left again.

In some traditions, the departure is announced by the ringing of a small bell, which the parents pretend to have heard of which is secretly done by one of the adults in the family.

These Christmas markets occur during Advent, which runs approximately from our Thanksgiving holiday through Christmas Eve.

It is during that time that rustic timber booths draped with fragrant evergreen boughs line the town squares and it is here that vendors and artists sell items such as toys, blown-glass ornaments, cones of warm sugared almonds and steaming mugs of Glühwein (spiced mulled wine) to holiday shoppers, accompanied by traditional singing and dancing.

Experiencing a Christmas Market is one of the highlights of the Holiday season in these European countries. Minnesotans primarily are of Germanic and Scandinavian heritage which also holds true for the remaining four states in this five-state region, with Germans in Iowa accounting for some 35%, 40% in South Dakota, 44% in North Dakota, and 42% in Wisconsin, based on the 2004 U.S. Census Bureau Report.

Notwithstanding this large population base with Germanic roots, until recently there have been few Germanic arts and cultural offerings in the Minnesota area.

These European open-air Christmas festivals date back some seven centuries and ECM will revive this cultural tradition and bring its sights, sounds, and aromas to downtown Saint Paul.

ECM will address also the concern of some about the over-commercialization of Christmas and restore the cultural emphasis on family and friends. Also, something special is the Krampus and we encourage you to learn more about the Krampus tradition. 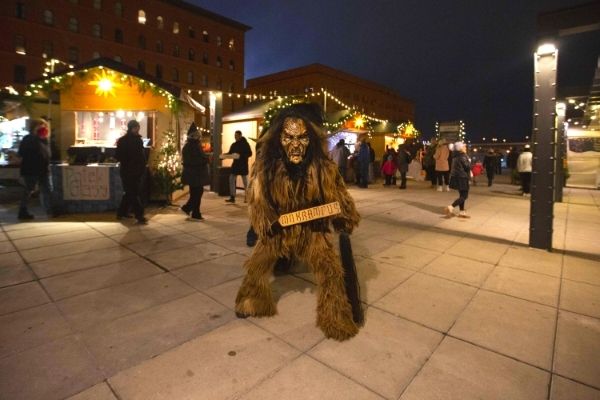 *This information was collected primarily from Wikipedia and attested to by German immigrants.